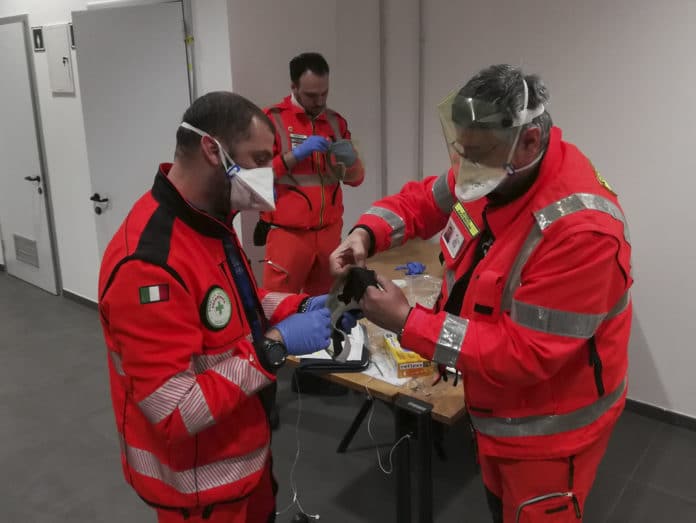 On the 9th of March, the Italian Prime Minister announced that the whole territory of Italy is under quarantine. All public events, civil and religious ceremonies are canceled. Schools, universities, churches, theaters, museums, and places of public gatherings will remain closed until the 3rd of April. Citizens have been highly recommended not to leave their homes (except under exceptional circumstances).

These policies are designed to ensure everyone’s safety and prevent further spread of the virus.

Still, we can hear many voices of dissatisfaction and protest against these restrictions.

How does it look from the point of view of the people who are directly dealing with this emergency?

A dramatic testimony of a doctor at the Humanitas Gavazzeni Clinics in Bergamo was posted on social media. In his post written on Facebook, we can catch some insight into the reality of doctors and the nursery staff who are spending their whole time in the emergency room trying to help the infected patients.

Here are some of his quotes (translated from Italian):

Corona Virus is a challenge for the medical world, and there is no medicine that could directly eliminate the virus.

“ [infected patients] don’t breathe enough, they need oxygen. Drug therapies for this virus are few. The course mainly depends on our organism. We can only support it when the organism can’t take it anymore. It is mainly hoped that our body will eradicate the virus on its own, let’s face it. Antiviral therapies are experimental on this virus and we learn its behavior only day by day. Staying at home until the symptoms worsen does not change the prognosis of the disease.”

“One after the other, the departments that had been emptied are filling up at an impressive rate. The display boards with the names of the patients, in different colors depending on the operating unit they belong to, are now all red and instead of displaying the surgical operation they show the diagnosis, which is always the same bloody one: bilateral interstitial pneumonia.”

The symptoms of the virus can be very serious, not only for elderly people.

“Covid–19 causes a banal influence in many young people, but in many elderly people (and not only) a real SARS (…). The resulting respiratory failure is often serious. It means that after a few days of hospitalization, the simple administration of oxygen may not be enough.”

“Sorry, but as a doctor, it doesn’t calm me down that the majority of serious cases are mainly elderly people with other pathologies. The elderly population is the most represented in our country. It is difficult to find someone who, above 65 years of age, does not take at least medication for pressure or diabetes. I also assure you that when you see young people who end up intubated in intensive care,  (…) all this peace of mind for your young age does not last long. And while there are still people on social networks who pride themselves on not being afraid by ignoring the indications, protesting that their normal lifestyle habits are “temporarily” in crisis, the epidemiological disaster is taking place.”

Hospitals were prepared for the outbreak of the epidemic, doctors and nurses work in solidarity supporting each other despite exhaustion.

“I found it incredible, or at least I can speak for HUMANITAS Gavazzeni (where I work) how it was possible to put in place in such a short time a deployment and a reorganization of resources so finely designed to prepare for a disaster of this magnitude. And every reorganization of beds, wards, staff, work shifts and tasks is constantly reviewed day after day to try to give everything and even more.”

“The staff is exhausted.”

“I saw solidarity from all of us, who never failed to go to our internist colleagues to ask “what can I do for you now?””

Avoid close contact with people, stay at home if possible!

“[it is] almost 2 weeks that I voluntarily see neither my son nor my family members out of fear of infecting them, who, in turn, could infect an elderly grandmother or relatives with other health problems.”

“So be patient, you, who can’t go to the theater, museums or gym. Try to have mercy for that myriad of elderly people you could exterminate. It is not your fault, I know, but of those who convinced you that you are exaggerating. Even this testimony may seem just an exaggeration for those who are far from the epidemic! But please, listen to us, try to leave the house only under exceptional cases.”

“Oh yes, due to the shortage of certain safety devices, I and many other colleagues are certainly exposed despite all the means of protection we have. Some of us have already become infected despite following the protocols. Some infected colleagues have also infected relatives and some of their family members are already struggling between life and death.

You can find the original post HERE (in Italian)